Some people are lukewarm about Twitter (or just plain cold) and others are ambivalent. For me, it’s always been an outstanding resource for information consumption. And I love it. This is how I get the most out of Twitter: 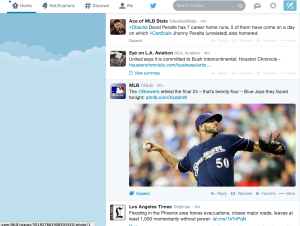 a 10-minute investment in Twitter (bathroom, line, in-laws’ house) provides me a good 1-2 hour in “backtweets”

I never feel the need to ‘catch up’ – it’s like radio. what’s on is on

I figured out my personal interests and placed an emphasis on:
I follow VERY few celebrities – namely Bo Jackson, Magic Johnson, Brett Hundley, Kobe Bryant; L.A. oriented people that don’t send subpar tweets. Generally it’s a horrible idea to follow celebrities – or friends – because they waste both yours and their time with their tweets. This is the NUMBER ONE REASON WHY PEOPLE LEAVE TWITTER.
You will note redundancy on my timeline. it’s not annoying or discouraging; the nature of the beast is multiple people talking about the same thing.
That said, I’m pretty good at sourcing people that stay within their realm of expertise, which means you won’t see my athletes talking about Obama or my politicians talking about Clayton Kershaw.
Sometimes, though – in cases like the Emmys or the finale of a Netflix serial – everybody chimes in. Those are the days I just stay off Twitter. 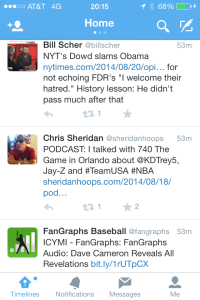 I’m on Twitter for INFORMATION, hoping to find a trove of legitimate and interesting linkouts or tidbits.
As I develop further interests or seasonality approaches

I add a few dozen sources and pare down based on quality.

Again, I’m a big proselytizer for Twitter because I find it the absolute BEST universal source for both quick-hit and long-form linkout news and information. I’m not a consumer of entertainment, but I am definitely a consumer of ongoings, especially when tailored to my personal interest.

Seriously catch the breadth of this Jamie Moyer’s career – stats below.
He debuted in the bigs in 1986.
NINETEEN EIGHTY SIX!

Cool article. Whats even cooler is the experts didn’t know this one existed. Ironically probably decreases value for the other ones that do exist.

The Roman Catholic nuns are auctioning off the card, which despite its poor condition is expected to fetch between $150,000 and $200,000. The proceeds will go to their ministries in 35 countries around the world.

A near-mint-condition T206 Wagner card sold in 2007 for $2.8 million, the highest price ever for a baseball card. Muller remains aghast that the 1 1/4-inch-by-2 1/2-inch piece of cardboard could sell for even a fraction of that.

“It just boggles your mind,” Muller told The Associated Press. “I can’t remember a time when we have received anything like this.”

The brother of a nun who died in 1999 left all his possessions to the order when he died earlier this year. The man’s lawyer told Muller he had a Honus Wagner card in a safe-deposit box.

When they opened the box, they found the card, with a typewritten note: “Although damaged, the value of this baseball card should increase exponentially throughout the 21st century!”

The card was unknown to the sports-memorabilia marketplace because the nuns’ benefactor had owned it since 1936.

It has a big crease in the upper right-hand corner, and three of the white borders have been cut off. It has also been laminated. But even in poor condition, a T206 Wagner card is prized by collectors, said Chris Ivy, director of sports auctions at Heritage Auction Galleries in Dallas, which is auctioning the card.

“The T206 set is known as ‘The Monster’ among collectors. It’s just really tough to complete the entire set,” Ivy said. The Wagner card is “one of those that’s always sought-after, always desirable, and there’s not a big population of them. Even in a lower grade, they do have quite a bit of demand and command a strong price.”

Wagner, nicknamed “The Flying Dutchman,” played for 21 seasons, 18 of them with the Pittsburgh Pirates. He compiled a .328 career batting average and was one of the five original inductees into baseball’s Hall of Fame.

The card was printed during the prime of Wagner’s career, but the American Tobacco Company ended production soon after it began. Some say Wagner didn’t want to promote tobacco products to children. Others believe it was a dispute over money that led to the card being pulled.

On the card, Wagner appears stocky and pale, with his hair parted down the middle and the city on his jersey spelled as “Pittsburg,” the official spelling at the time.

Muller is making frequent checks to the Heritage Auction Galleries website — an unusual practice for someone who’s taken a vow of poverty. But potential bidders should know that the sale of the card will help people worldwide.

“The money that we receive from this card will be used for the many School Sisters of Notre Dame who are around the world, who need support for their ministries for the poor,” Muller said.

Hope some (any?) of you picked up a hardcopy Daily News because they’re kicking off their 100th year as a Valley-based paper. Former sportswriter and above-average hack Kevin Modesti takes a shot at making news about recapping the news of Valley news.

This the type of day that makes swaths of Southern California feel downright heavenly. Awaken awash in sunshine, with a hint of autumnal crispness injecting energy into a Sunny Sunday. . .in short, a perfect day to blaze one to the first formal effort from notorious Bat Caver, Spinwell: Music for a Sunny Sunday Afternoon.

A hardwood floor reflects an emboldened sun on the cover, immediately setting the tone visually as track one (3582,Sound Imaging, 2001) breezes into an ill sample, foreshadowing the next hour’s journey:

“We have a fine program today. Today the orchestra is going to paint pictures for us; pictures in sound. But we have to listen very carefully. . .and use our imagination. . .”

The CD art is exceptional as well, a personal slice into the crates of Spinwell, featuring vinyl classics such as K-Otix, Dusty Fingers, Zero 7, etc). . .here’s a small shot:

As the album launches into the wonderfully sentimental, piano- & horn-laced Atmosphere track, God’s Bathroom Floor (1997), the compilation reaches full chill mode. Perusing through the uncharacteristically introspective liner notes from the reclusive, analytical mind of Spinwell, the listener is complemented by the processes of the track selection, which encapsulates the album’s intended mood precisely.

From the words of Spinwell:

As the bass reflects of of said florrs, the smoke dissipates into the ethereal nature of the album. Quasimoto’s Boom Music (2000) gives way to the underground classic Pete Rock remix of Black Star’s Respiration (1999) featuring Black Thought. Mos Def delivers one of the ultimate introductory couplets on record:

Followed by an obscure but oft-sampled early funk record, On the Hill by Oliver Sain (1972) and segueing into the Brit Hop stylings of Emmanuel (Let’s Go Away, 2005), Spinwell ensures that his international palate is satisfied without compromising the overall feel of the record.

Ensuing tracks include artists such as Siah and Yeshua da poEd, France’s appropriately-named Mike, Thes-One and a YKI favorite, Asheru and Blue Black.

As the album reaches a climax with Common’s I Used to Love h.e.r. (1994), the tape segues perfectly into George Benson‘s The Changing World (1974), which actually is the source for the legendary Common track.

With a runtime of a little over 79 minutes, the beats keep coming and mix melts more and more into the Sunday malaise, just chilling and enjoying the Sun.  Here’s hoping you do the same: 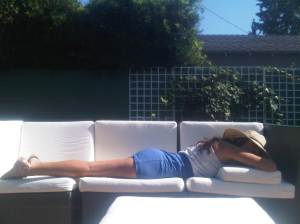 Listen to MSSA Here on Mixcrate

This video will have probably been removed by MLB by the time you read this, but hopefully you can see the video.

We all know that modern guns are baloney but even with a +/- 5-7%, this is incredible. And he’s Left-Handed, wow.
“Cuban Missle” <—excellent nickname. Hope they don’t ruin the kid with Pitch Counts.

ps – Kudos to Craig Counsell for grounding out on the 103mph heater. THAT is a big-league hitter.

Well, Angelenos, one monopoly really is over. . .the latest issue of U.S. News & World Report has USC ahead of UCLA in their renowned University rankings for the first time ever.

Though the new rubric used to determine the rankings has much to do with this shift, but the budgetary mess strangling the State of California may really be putting a dent in public UCLA’s efforts to keep up financially with the privately funded Trojan coffers.

With all that’s happened with their Athletic Department recently, perhaps Southern Cal will now focus their efforts on being the premier academic institution in the Southland. . .okay, that’s a stretch but still – WOW.  Fight on, BRUINS.

Glad to see a Valley institution getting a renovation (instead of, say, shut down).
Casa Vega gettin’ a makeover.

“It was a year to the day that my best friend died and for weeks I sat alone in my room and cried. . .”

While the UCLA Baseball team attempts to duplicate the softball team’s National Championship against TCU in Omaha, the above Murs quote from Walk Like a Man on the genius album 3:16 – the Ninth Edition bumped in my rental Saturn Aura today en route to work – coincidentally, a year to the day that Michael Jackson died. . .

And while certainly not my ‘best friend,’ Michael was truly a ubiquitous childhood presence since my parents purchased the Off the Wall vinyl record for my little record player. Thriller and Bad were soon to follow, along with the decades of drama, controversy and just plain weirdness. 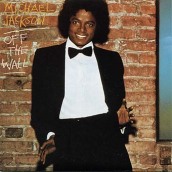 Personally, this is more notable for me because I was with Irene and Rezzy Rez in the Weird streets of Austin. After a day of grinding the hot pavement around Congress & 6th, my beautiful wife & I passed out in the quirky, wonderful room of the Hotel San Jose. . .only to awaken at 9pm local time to a phone call from Denicke claiming that the King of Pop was dead.

Shaking the cobwebs from my overheated brain, I immediately was in disbelief – sure, we all know Michael is crazy/unhealthy/eccentric/nuts but he’s not dead?!?! Sure enough, I had slept through 11 text messages and four other missed calls. Turning the flat screen to CNN, it was all Michael. Shots of the UCLA Hospital flooded the airwaves; vigils were spontaneously sprouting throughout the greater L.A. region – yet here we were, halfway across the country.

I remember wishing that I could be back home – the socio-cultural chaos nearly crashed the internet – so I could feel first-hand what Michael’s adopted native streets were feeling. Texting and calling my L.A. friends as I could, the vicarious feel just wasn’t enough to supplant my melancholy reverence for a childhood icon dying suddenly. We proceeded with our plans to enjoy the city, expecting the ‘normal’ craziness of downtown Austin.

What we saw instead, however, was a vibrant homage to Michael. Each bar was loudly playing his smash singles:the Ventura Blvd.-inspired Billie Jean to Pretty Young Thing to Smooth Criminal to Rock With You were on rotation all night, everywhere. People were talking about Michael nonstop and for this one night – it really was about the positivity, something that hadn’t been associated with Michael in at least two decades. It really was a party, and after about eight drinks (and countless bars), we ran into a street artist, who was putting the finishing touches on this work of at:

We were mesmerized, inspired and amazed – even after the nonsense, after the accusations and improprieties, after the self-imposed isolation, and it was an appropriate tribute to a man that really was able to make us feel like a child again; even for one night.

So this is for you, Michael Jackson. Rest in Peace – you’re still, and will always, be loved.